I recently saw that Greta Thunberg, the tortured misanthropic devil child who is best described as the first cousin of Rosemary’s baby, had slithered back into the public square to blather more climate craziness.  As usual she was cheered by the adult versions of Children of the Corn, as if Thunberg had a hint of reality rattling around in her hollow head. … My friend and colleague Rich Kozlovich wrote a masterful piece for the July 4, 2022, post on his blog Paradigms and Demographics.  It is a beautiful rebuttal to the environmental extortionists and forest fairies panhandling the lies of climate change.

Global Warming and How Some Things Never Change.

I have been probing the arguments for global warming for well over a decade. In collaboration with a lot of excellent coauthors I have consistently found that when the layers get peeled back, what lies at the core is either flawed, misleading or simply non-existent. – Ross McKitrick

As I go back to view old pieces I’ve posted I came across this piece going back to 2008 entitled Another Skeptic.  This was a letter to USA Today from Dr. Martin Hertzberg, a retired Navy meteorologist with a PhD in physical chemistry, and published with his permission.  He went on to say:

As a scientist and life-long liberal Democrat, I find the constant regurgitation of the anecdotal, fear mongering clap-trap about human-caused global warming (the Levi, Borgerson article of 9/24/08) to be a disservice to science, to your readers, and to the quality of the political dialogue leading up to the election.

The overwhelming weight of scientific evidence shows that the Gore-IPCC theory that human activity is causing global warming is false. For details see my article, “The Lynching of Carbon Dioxide”, in the “guest authors” section of carbon-sense.com.

(Editor’s Note: The first and third links work, and are up to date. RK)

The difference between a scientist and propagandist is clear. If a scientist has a theory, he searches diligently for data that might contradict it so that he can test it further or refine it. The propagandist carefully selects only the data that agrees with his theory and dutifully ignores any that contradicts it. The global warming alarmists don’t even bother with data! All they have are half-baked computer models that are totally out of touch with reality and have already been proven to be false.

Here is some of the latest data. From the El Nino year of 1998 until Jan., 2007, the average temperature of the earth’s atmosphere near its surface decreased some 0.25 C. From Jan., 2007 until the Spring of 2008, it dropped a whopping 0.75 C. The National Weather Service just issued a Sea Ice Advisory for the Western and Arctic Alaskan Coastal waters for significant ice developing in the next 10 to 14 days, with sea surface temperatures some 2 to 8 C colder than last year. Such recent data is “just the tip of the iceberg” that is in process of sinking the Gore-IPCC ship of cards.

That was 14 years ago, and it was obvious even then all the global warming/climate change hysteria was just propaganda, not science.  And the evidence of that keeps piling up to the point there can no longer be any justification for pushing their “climate change” agenda.  An agenda over a “crisis” most no longer believe in, especially since what warming there was stopped 25 years ago in what they’re calling “the pause“, and it still wasn’t anywhere near the temperatures of the Roman and Medieval Warming Periods.

And as always, leftist hysteria is following by demands that these heretics must be purged from government, academia, politics and the media who disagree with their secular religious movement, the Church of Wokeness, with the religious tenet of socialized tyranny, aka, socialism, leftism, communism, environmentalism and the enforcer of it all is the Democrat party in collusion with the United Nations, the EU and a host of strange people with a lot of money, like George Soros, and I include Bill Gates among that host..

This “pause” is in fact a tacit acknowledgement there is no warming but they just can’t bring themselves to openly admit they’re wrong, hoping beyond hope warming will return and the Chicken Littles can once again come out in packs hunting down the “deniers“, all heretics to the sacredness of the sect of the Church of Wokeness, the Church of the Warming Globe and it’s High Priest, Al Gore:

“a C university student, a divinity school dropout, a lawyer with no science studies, an majority owner/investor in a company selling ‘Carbon Credits’ with a vested interest in limiting CO2 for profiteering and the producer of a movie that the British Courts found to have 9 or 11 inaccuracies and could not be shown in British schools without identifying and explanation of the inaccurate claims.”

In 2018 I published this piece, Global Warming Predictions, Especially About the Future, is Really Hard, saying:

Al Gore’s Prediction For December 2017 Was Way, WAY Off The Mark, Andrew West outlines some of the scare mongering spouted by The High Priest of the Church of the Warming Globe, Al Gore.  Scare mongering did I say?  Yes, but I think that’s putting it mildly for what Gore has done.  I would add lying, profiteering, scamming and fraud to that list.  West goes on to say:

“Just how bad were some of Gore’s predictions?  Well, for starters, he believed that the North Pole would be completely devoid of ice by today.”

And in the process he’s managed to enrich himself immensely.  Apparently he didn’t think the emergency was so great he should stop trying to get more money, or not live in massive energy sucking “$9 million beach front home in Montecito, [California]. Guess Al is not really afraid of sinking into the sea.”

And we’re shocked his prediction have been wrong?

The four pillars of modern environmentalism are junk science, regulatory abuse, secular neo-paganism and insanity.   However, in point of fact, we’re probably going to be facing a period of global cooling: 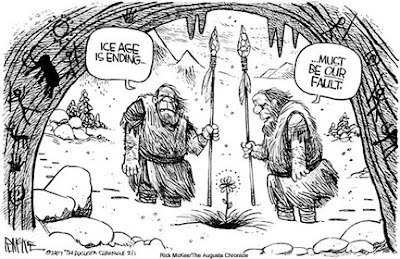 “All good hoaxes must come to an end, and this week’s frigid and dangerous arctic blast may be another nail in the coffin for the “global warming” charlatans. The idea that the entire globe is somehow filling with greenhouse gasses, thusly heating the planet up to the point of no return, is patently absurd.”

Yet, these elitists, fake scientists and globalist continue to push that agenda.  An agenda that even it it could change the world’s climate the amount of change would be meaningless to the world’s temperatures, but the cost and the impositions would change humanities ability to live well and live longer.  Their constant efforts to restrict access to energy is mind boggling, and will impact everyone and everything we do, including the ability to produce sufficient food for the world, all in the name of Climate Change.

We have to understand with all these hysterics we’ve now turned over all authority and power to the unconstitutional Fourth Branch of Government, the bureaucracy.  A Deep State rife with corruption, and that includes the judiciary, who Larry Klayman called political hacks.  Unaccountable absolute authorities that are filled the people who went to college and into government and believe that government is the be all and end all feeding at the government trough at the expense of who and what they despise and hold in contempt:  America and the taxpaying citizens of this nation.

“There is only one possible conclusion regarding the reliability of climate predictions. Outspoken catastrophic-minded climate scientists and high-ranking officials don’t have a clue about future climate and its consequences, and are inventing catastrophic predictions for their own interest. Government policies should not be based on their future predictions.  Another conclusion is that studies and opinions about future climate are heavily biased towards negative outcomes that fail to materialize, while ignoring positive outcomes that are materializing.”

The Book That Grows Upon Us - Sunday Thought For The Day

Charles Spurgeon is often referred to as "The Prince of Preachers" said: “The best books... The best books of men are soon exhausted-- they are cisterns, and not springing fountains. You enjoy them very much at the first acquaintance, and you think you could hear them a hundred times over- but you could not- you soon find them wearisome. Very ...